Most wheeled or treaded vehicles have many ways to steer either left or right.

This method uses two pairs of wheels of the same size keyed to move left and right by reversing each control of either the front, back or the centre of the wheel to allow the vehicle to steer at the swivel centered between the steering wheel. Requires: reeeany Locomotives

This Method is the same as the reverse wheel except the reverse wheel are placed within the base wheel of the same size and linked diagonally so the vehicle will spin at the centre of the base. This kind of vehicle can turn very well. It can turn in its own radius. If too hard for some narrow chassis, change the inner or outer wheels to lower speed in order to get a good mix of responsiveness and control. Requires: Wheels/Large Wheel

Start with any regular chassis you like. Place the Steering block at each corners. Bind the key to make it steer, depending on the placement. You can add more sets of Steering Blocks/Hinges along each side with the same setup as needed. Requires; Fast: Medium Cog. Slow: Steering Block/Hinge

This is not limited to vehicle types, but more useful on low friction vehicles, if the weight on it is not large enough. Place a wheel (or cogs) parallel to the axis you want to rotate, then add suitable weight on it. Rotating it will then affect the axis of the vehicle.

This is used on low friction land vehicles like Hovercrafts, by placing small propellers or a large ones for more speed. Steering must not be placed placed diagonally towards the centre of the mass, otherwise it will just the basic mobility.

This is an Important part for a helicopter to turn properly since the tail has to be placed on the back of the Helicopter without causing the vehicle to lose Balance. Wing panels are optional and made to stabilise the vehicle's Turning.

This is a alternative method to yaw a helicopter properly which makes use of the torque system. Basicly when the clockwise rotor(s) turns faster than the counter-clockwise one(s), the craft will be rotated counter-clockwisely. 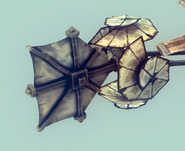 Example of a Tail Rotor
Add a photo to this gallery
Retrieved from "https://besiege.fandom.com/wiki/Basic_Steering?oldid=9595"
Community content is available under CC-BY-SA unless otherwise noted.